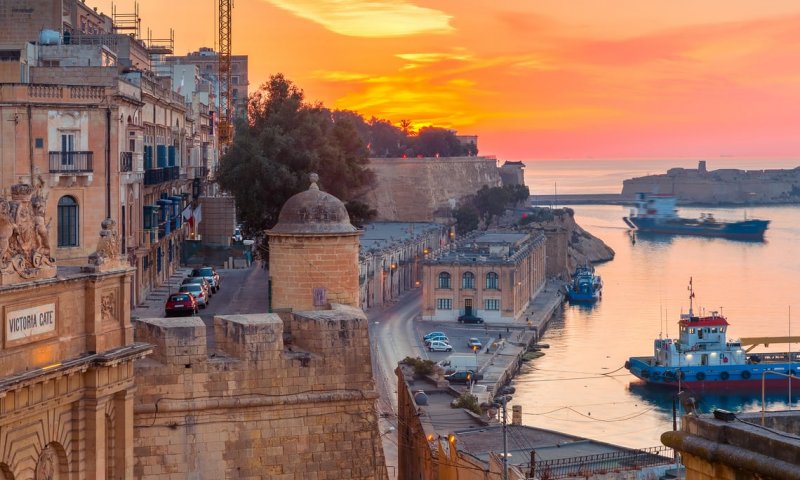 Valletta on view: Malta's capital shows off its cultural side

With a new flagship gallery and music galore, the 2018 joint European Capital of Culture is putting on more than enough exciting events to shake off its pretty-but-sleepy tag

Old Valletta has seen some intense years: 1565, for example, when it was besieged by Ottoman forces; and 1941, the height of the Axis powers’ attempts to bomb or starve Malta into submission. But 2018 looks set to be an equally memorable, and much less harrowing, time, as more than 400 projects mark its year as European Capital of Culture.

Malta has managed to shed its pensioners’ package holiday image, reinventing itself with boutique hotels and festivals. And Valletta itself, a city barely touched for centuries – except by Luftwaffe bombers – has changed, too. A decade ago, its 40,000 office workers would depart the city every evening, leaving its ancients streets with barely a bar or restaurant to lighten the gloom.

Today, visitors stay here, in old townhouses repurposed as boutique hotels, rather than heading to touristy Sliema or St Julian’s. And while teens still party in Paceville, on the coast further north, Valletta’s Strait Street has evolved into a more sophisticated nightlife hub. Over the coming months Strait Street will see bars, restaurants and music venues collaborating on live shows, street theatre, performance poetry and jamming sessions – part of an ambitious vision for Valletta, that by the end of 2018 should garner it a reputation as one of the Mediterranean’s most exciting and innovative arts cities. Here are some of the year’s standouts.

If anything symbolises new-look Valletta, it’s the remodelled City Gate, which is the focus of much of the celebrations, particularly the opening ceremony. Malta’s biggest architectural undertaking for centuries, it has been masterminded by Italy’s Renzo Piano. His elegant Parliament building, just inside the gate, has been acclaimed for its innovative use of Malta’s traditional building material, globigerina limestone from the island of Gozo. Now, shallow flights of steps lead up either side of new “gate” – actually just a gap in the 16th-century walls, through which Valletta welcomes the world – to garden areas with great views of the fortifications and a newly landscaped moat with outdoor performance space. (Also opened in January – after many delays – was Valletta’s 1860 covered market, a few minutes’ walk into the city. It was brought back to its former wrought iron glory in a €14m project, and now has stalls, bars, restaurants and cultural spaces.)

The flagship opening of 2018 is the new art gallery: Muża stands for Mużew Nazzjonali tal-Arti but muza is also Maltese for muse or inspiration. Scheduled to open in May in the 15th-century Auberge d’Italie, once home to the Italian Knights of St John, it will house the art collection of the former national gallery (closed in 2016) plus new acquisitions and commissions. There are rumours of world-class pieces being loaned temporarily from Florence or Rome. Before then, the Spazju Kreattiv cultural centre in a former fort built into the city walls, has European Eyes on Japan (until 29 April) by Maltese photographer Alexandra Pace and a photographer from Leeuwarden, this year’s co-capital of culture, both of whom were invited to live and work in Japan. Works by 20th-century giants Picasso and Mirò are on show at the Grand Master’s Palace until 30 June. muza.heritagemalta.org

From Maltese artists looking out to international artists looking in: Altofest(which opens on Friday in Strait Street, then in 12 venues across Malta over the ensuing four weekends) is an intriguing experiment in contemporary live art. Twenty Maltese citizens will host international artists in their homes as they develop works on the theme of “Legendary People”. The homes will then become venues for the performances. Theatre lovers will also enjoy a trip to the open-air theatre in Ta’ Qali, Malta’s only national park, for Cantina (11-13 May), which uses Bertolt Brecht’s play Saint Joan of the Stockyards, set in a 1930s meatpacking plant, to take a fresh look at the theme of food and how it is valued.

The music season warms up in May, along with the weather. Also in the national park, the eco-conscious Earth Garden Festival (31 May-3 June, one-day pass €15, camping €40pp) promises to be a feast of colour and sound with more than 35 acts. The lineup includes Lakuta, the Turbans and Gentlemen’s DUB Club. July sees Malta Calls (tickets not on sale yet) an outdoor dance event led by Swedish DJ Per QX, in Pembroke, north of Valletta. Those visiting later in the year should look out for Kentaro!! (dates tbc), in which the Japanese DJ and choreographer will combine dance group Tokyo Electrock Stairs with local Maltese hip-hop artists.

Pageant of the Seas

More mainstream, but certain to be spectacular, is this free event in the Grand Harbour on 7 June, with boat races and water-borne carnival floats. Hundreds of swimmers compete in a race across the water from Fort St Angelo, and in another event, teams construct boats from recycled materials and use them to cross the harbour without motor or traditional oars.

In November, Austrian artist Willi Dorner is bringing his Bodies in Urban Spaces project to Valletta (after success in Copenhagen, Porto and 100 other cities). He calls it “a temporary intervention in diversified architectonical environments” but in normal language this means squeezing human bodies into the nooks and crannies of public spaces and seeing how people react. In the past the police have been called by people thinking they were witnessing vandalism or burglary. It will be interesting to see how Malta’s quite traditional police force (founded in 1814 under a British governor) will react.