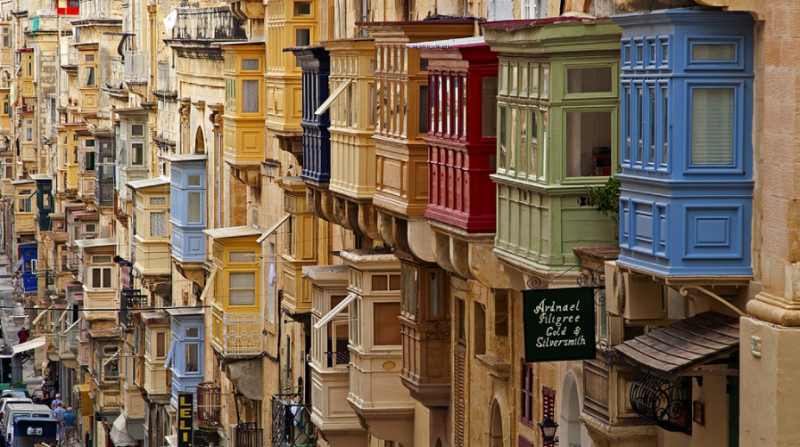 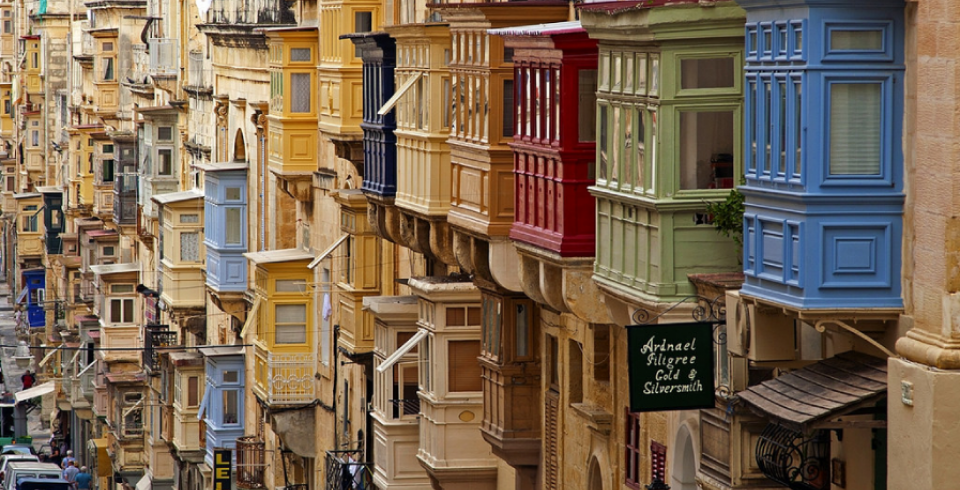 The story of Malta's capital is inextricably linked with the island's mythology – after laying Valletta's foundation stone in 1566 the Knights of St John created an elegant baroque city from an arid, empty peninsula. But, don’t imagine that it’s just a relic of the past. Behind the foreboding fortifications you’ll find a living city that still has plenty of stories to tell, home to groundbreaking contemporary architecture, delicious cuisine and a thriving nightlife scene.

Valletta is Unesco-world-heritage listed for its harmonious collection of baroque architecture: imposing military forts and deep moats circle its perimeter, elegant church domes and spires pierce its skyline, and richly embellished palazzos jostle for space next to towering townhouses with bright green wooden balconies. As you wander the city’s streets, remember to look up: il-Beltin (residents of the city) uphold the centuries-old tradition of peeping from their balconies at the street life unfolding beneath them.

Valletta’s baroque highlights include the elegant Auberge de Provence, now the National Museum of Archaeology; the Grand Master’s Palace, once home to the leaders of the Knights of St John; and at the recently restored Fort St Elmo, which guards the end of the peninsula and houses the National War Museum. You can also explore a baroque hospital at the Sacra Infermeria and Knights Hospitallers Exhibitionand visit the peaceful 16th-century Church of St Paul’s Shipwreck. End your day at St James’ Cavalier, a sixteenth-century fort that has been converted into contemporary arts centre, and swing by the nearby Upper Barrakka Gardens for a spectacular sunset.

The treasures of St John’s Co-Cathedral

Don’t be fooled by its austere stone exterior – stepping into St John’s Co-Cathedral is like stepping into a glittering jewellery box. Built by the Knights of St John between 1573 and 1578, it is an exceptional monument to the high baroque that is, every inch, gilded, painted or carved in stone.

Look up to admire frescoes by Calabrian artist and Knight Mattia Preti, down to see a marble patchwork of 375 Knights’ tombs, and around to see walls festooned with heraldic symbols and cherubs. If you start to get lost in the heady atmosphere, make sure you don’t miss the Cathedral Museum with its pair of paintings by Caravaggio, including his largest, the renowned Beheading of St John the Baptist.

Despite its many historical treasures, Valletta isn't frozen in time, and the most striking proof of this is the definitively modern remodelling of the area around the City Gate by renowned architect Renzo Piano (famous for London’s Shard, Paris’s Centre Pompidou, and the New York Times Tower).

The sleek, minimalist City Gate forms an understated bridge, crossing the 18-metre-deep, 20-metre-wide moat into the fortified city. Both Piano’s gate and his new Parliament Building are made from huge blocks of cream-coloured stone quarried on Malta’s sister-island of Gozo. The eco-friendly Parliament Building is supported on stilts, appearing to levitate over a public square, its facade sculpted with a geometric pattern of perforations that filter solar radiation whist still allowing daylight in.

Piano’s third structure is an Open-Air Theatre that rises from the ruins of the old Royal Opera House, which was destroyed by bombing in WWII. Check at the box office for upcoming (often free) performances under the stars.

Step off the beaten path and away from the crowds to explore the city’s deserted shoreline, where you’ll find whispers of a military maritime past. Across from the Mediterranean Conference Centre and adjacent to the Malta Experience theatre, you’ll find a concrete staircase that descends past a jumble of boathouses to the sea.

Proceed north along the roughly hewn footpath that runs right around the tip of the peninsula to find hidden swimming holes, secret tunnels that connect Fort St Elmo to the sea, and incredible views across the Grand Harbour. As you ponder a swim in the turquoise water (while not marked as a swimmer’s zone, it is clean and safe enough close to the shore) take a moment to picture the ferocious battles of the Great Siege, fought here between the Knights and the Ottoman Turks in 1565.

Descend into the underworld

There are few places in Valletta where the ground beneath your feet is not, in fact, hollow. During WWII Valletta was the most heavily bombed city in Europe (6700 tonnes of munitions fell on it during April 1942 alone), giving rise to a city beneath the city – a network of subterranean rock-cut tunnels, cramped living quarters and makeshift chapels.

Today, most of these war shelters are dilapidated and closed to the public. However, you can see a fine example of a privately owned war shelter at Casa Rocca Piccola – it is dark, damp, and fascinating. To see the secret underground WWII headquarters where the defence of Malta was masterminded, take a guided tour of the the Lascaris War Rooms (www.lascariswarrooms.com), located below Upper Barrakka Gardens.

Valletta’s residents have found some innovative new uses for these subterranean spaces: on the shoreline at Barriera Wharf they have been converted into beach houses, and nearby on Barriera Street the jazz bar at The Harbour Club (www.facebook.com/Theharbourclubmalta) is housed in a restored cistern.

You won't have a bad meal in Valletta, as long as you skip the touristy restaurants in the main squares and follow the smell of simmering rabbit stew and freshly grilled fish to the side streets.

For an authentic Maltese breakfast, pick up a ricotta-cheese- or mushy-pea-filled pastry at a pastizzerija (try Capri Caffe on Zachary Street), or rub shoulders with Malta’s politicians over an espresso at the opulent Caffe Cordina. For lunch, head to St Lucia Street where local favourites vintage-themed Café Jubilee (http://cafejubilee.com.mt) and hole-in-the-wall Piadina Caffe (http://piadinacaffe.com) serve up Maltese-style ravioli and traditional sandwiches made with ftira bread.

As the sun goes down, have a spritz at the upmarket Charles Grech cafe on Republic Street. For dinner, book a table at Guzé (www.guzevalletta.com) for traditional Italian-Maltese fare in a 16th-century palazzo, or La Mere (http://lamere.com.mt) for a taste of contemporary Indian in an old Maltese townhouse.

In the nineteenth century, American and British sailors calling at the port of Valletta congregated in Strait Street – a narrow alley of underground restaurants, music halls and brothels, known at the time as ‘The Gut’. This gritty underbelly became as much a part of Valletta’s identity as its baroque buildings. However, Malta’s independence in 1964 caused a sharp decline in visiting sailors, and Strait Street was forgotten for a time.

Recently, restaurateurs have breathed new life into The Gut, kick-starting the renaissance of Valletta nightlife with sophisticated wine bars (Trabuxu, set in a 350-year-old wine cellar, is lovely) and al fresco restaurants (for traditional Maltese try Palazzo Preca, http://palazzoprecavalletta.com). Visit in the summer for live music acts, or in the winter stop at StrEat Whisky & Bistro (www.facebook.com/streatwhisky) or Badass Burgers (www.badassburgers.eu) for a nightcap after a performance at the nearby baroque Manoel Theatre.