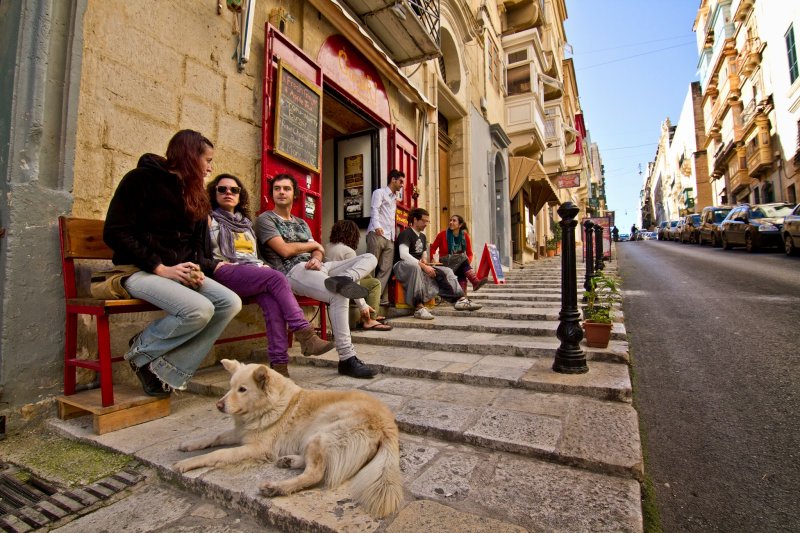 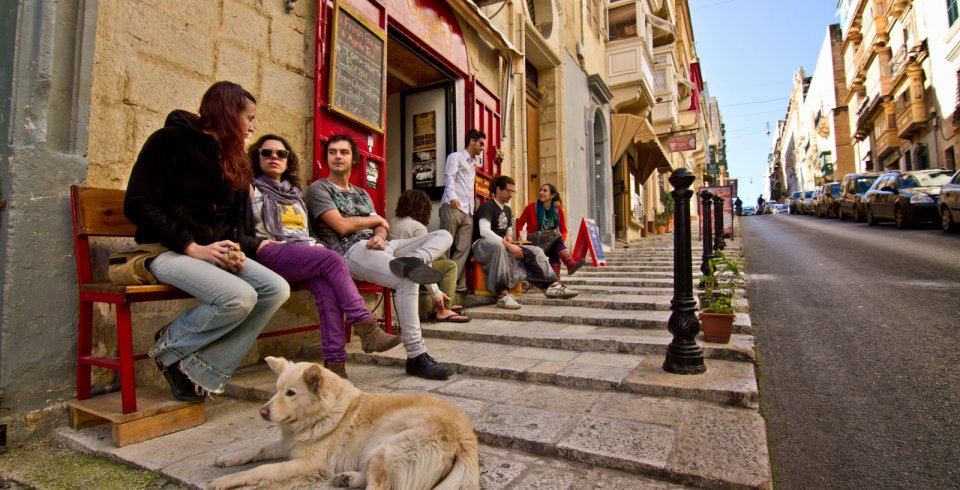 As a non-stop tourist attraction point and UNESCO World Heritage Site, Malta‘s capital Valletta has many restaurants and places to eat that will have you coming back for more. We have listed 10 such places to explore in this historically rich city.

On the way down the old and slightly uncomfortable steps to Fort Saint Elmo at the tip of the Valletta peninsula, you will find Ġugar. This place is a casual hangout frequented by the island’s locals. While hosting chess matches, book signings and providing an intimate setting for music gigs, Ġugar is also praised for serving wholesome food and smoothies. The interior matches the general laid-back atmosphere as the furniture is made from a colorful mix of upcycled materials, with books and board games on every shelf.

A true Mediterranean feast can be had at Guzé Bistro. Food on offer includes a variety of sea creatures such as octopus, seasonal vegetables as well as the local and traditional Maltese favorite, rabbit served in a number of modern variations. Housed in a 16th-century building, the decor at Guzé Bistro is low-key and inviting with eclectic touches of ornamentation. The menu has a range of complex dishes, such as the local goat’s milk cheese ‘royale’, with candied walnuts, honey and a thyme emulsion which uses local produce in a new and exciting way.

Hidden in the small streets of Valletta, Il-Ħorża is a cozy restaurant located across the harbor from Fort St. Angelo, a fortification dating back to the 13th century. When it is good weather out – which is very likely the case on any given day in Malta – you can eat outside and enjoy the remarkable view of the Grand Harbour. The restaurant’s interior is ornamented with stacks of wine bottles. Dim lighting gives it a romantic touch and the food is strongly influenced by French and Italian cuisine, but remains truly Maltese at heart.

Legligin is a Maltese onomatopoeic word for glugging down a drink. In the case of Legligin, the drinks of choice are an array of delicious wines set and kept at a good temperature in holes in the walls of this cellar-turned-wine bar. When you order a bottle, the owner quaintly plucks it out of the wall and serves it straight to your glass. Apart from the wines, Legligin also offers small dishes such as stewed octopus. But don’t get too attached to any one dish as there is no set menu and the food on offer changes regularly.

Really at the heart of Valletta, across from the Grand Masters’ Palace and former Maltese parliament building, sitting just on the square is Malata, a restaurant specializing in a fusion of Maltese and French cuisines. When it’s cold outside, you have the chance to sit inside the restaurant which is a 500 year old cellar decorated with caricatures of local politicians. Otherwise, you can eat your meal outside on the lively, newly renovated square. In addition to a lovely plate of food, you can also enjoy listening to live jazz music hosted regularly at Malata.

The piadina is a type of flat bread hailing from the Emilia-Romagna region of Italy and brought to Valletta by Piadina Caffe, situated just around the corner from St John’s Co-Cathedral. Piadina Caffe is a lunch cafe that serves piadine with various fillings among other Italian specialties, salads and soups. It is the perfect place to grab a quick bite on your lunch break or on the move, as the seating is limited. There is just a small bar inside and a few foldable chairs on the long steps outside of the cafe.

Rubino is a sort of landmark in Valletta and a must for any visitor. As its original sign on the facade of the restaurant still kept intact suggests, Rubino dates back to 1906, when it was a confectionery suitably placed on Old Bakery street. The cellar of the building was later converted into the restaurant that stands there today. Desserts still play an important role at Rubino. Among the traditional Maltese dishes, pasta and fish, your sweet tooth will be satisfied with their Cassata Siciliana, cannoli, a Maltese-style layered ice cream or the Torta tal-Marmurat, a chocolate tart with crushed biscuits, nuts and candied citrus peel.

Tal-Kaptan, or ‘The Captain’s’, is situated among the string of restaurants and retail outlets on the Valletta waterfront, a baroque wharf. This waterfront contains 18th-century warehouses that have been recently renovated after being destroyed during WWII. Known mainly for its pizzas, Tal-Kaptan is a go-to restaurant for a casual night out in a seaside setting. The all-wood interior and knotted sailing ropes are reminiscent of a ship, tying the out-at-sea theme of this restaurant together.

Trabuxu started out as a humble wine bar established in 2002, holding the status of being the first of its kind in Malta. It has now evolved into a brand of its own under which is the Trabuxu Bistro, Wine bar and Rooms. The bistro offers a range of food, from vol au vent to ravioli and other pasta dishes, each well paired with a bottle of wine. The warm red walls are decorated with paintings by local artists and the exhibition sometimes continues on the exterior walls for all passers by to have a look.

Zero Sei, or zero six (also Rome’s telephone code), is a Roman trattoria in Malta’s capital Valletta. This simply decorated Italian restaurant pays most of its attention to the food, which is, in the end, what’s most important. Located on the same street as the Manoel Theatre, Malta’s national theater constructed in 1731, Zero Sei is a great place to satisfy your appetite and have a glass of wine before or after a show.